There are some weekends in Napa where you don’t want to be anywhere else in the world. A recent one had a bunch of kicks with a Robert Mondavi dinner being the definite highlight. Mondavi’s chef Jeff Mosher provided excellent courses that matched perfectly with Mondavi’s wines, my favorite from the evening’s celebration:   Mondavi’s 2015 Reserve.

Aside from all the great food and wine, it was a real treat to enjoy the grounds, views and conversation around the dinner tables. Had a terrific conversation with a table mate who was a wine dealer who had come all the way from Tampa Bay to experience a Robert Mondavi dinner. And we both agreed it was hard to top the views while the sun set and our glasses kept being topped up by the attentive, professional staff. You ever get a chance, don’t pass on a Mondavi dinner, a once in a lifetime experience.  And you can on Thurs Oct 25th when chef Elise Kornack of Brooklyn’s Take Root restaurant is teaming up with Mosher to knock out some grilled appies and then a four course dinner in the Margrit Mondavi Vineyard room overlooking the Kalon Vineyard where I had so much fun. Book fast.

Earlier in the day had a lot of fun attending the Napa Blues, Beer and BBQ fest where most of downtown’s 1st  street had been blocked off for a great party. If you don’t like live blues music, beer and BBQ, well, I guess there’s no hope for you LOL.  There was a lot of good food, but my fav was the wings from Chicken and The Farm. I wasn’t the only one, as the eatery dished out over 300 pounds of wings to hungry Napa residents and visitors who lined up for a half an hour to get a taste of the wings that were so good.

I love wings, but wind up being disappointed more than half the time. Seem simple, but a lot of the time they wind up being too greasy, not enough meat, awful sauces, etc.  But man, that guy who was manning the deep fryer knew how to cook them just right.  They were perfectly crispy and lots tender meat under the delicious coating. I complimented him on the wings and his stamina in manning four deep fryers that were constantly broiling in the heat and the demand.

I said I get a little nervous around a deep fryer as all I can think about is that schmuck chef Artie in the Sopranos who got his arm shoved in a deep fryer by some cheap hood and the fry guy laughed his head off, nodding his head and remembering the scene.

Next day it was off to the Charles Krug winery where they were hosting Cochon’s 555 event. It’s not the place to be a vegetarian. More meat than you can shake a stick at, but oh so good. Grilled pork, lamb, squab, chicken, duck, rabbit, etc. My fav was the grilled beef that chef Johnathan Sundstrom from Seattle’s Lark restaurant was dishing up.  Holding back those fatty end cuts that I love, he happily plonked them on my plate, acknowledging a fellow carnivore’s love of all things fatty and good. Pair it with host’s Charles Krug’s 2015 Cab and you’re in meat and wine heaven.  Like I say, Napa was the place to be that weekend. 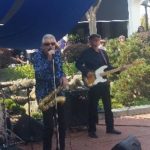