Some Kicks To Be Had … 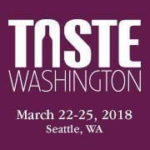 Sometimes it can be a drag waiting around for a grand tasting. It happens. A city’s got a dead night life scene and not very good restaurants and bars. Not fun. But man, that sure isn’t Seattle. Recently had a few days to kill and had a ball before Taste of Washington’s Grand Tasting which was held underneath the football stands of the Seahawks at CenturyLink Field.

Bounced into SeaTac airport on a Thurs morning. I knew the food was going to be good at Taste’s Red and White reception that night at El Gaucho’s waterfront Aqua restaurant. Problem was I was starving at the moment and I didn’t want to ruin my appetite. Got lucky by finding DragonFish Asian Cafe at Pine and 8th that had an appreciated early happy hour at 2 pm. Ordered some spring rolls, a DragonFish salad and a Poke Roll which was ahi tuna with some healthy veggies in a sushi roll. 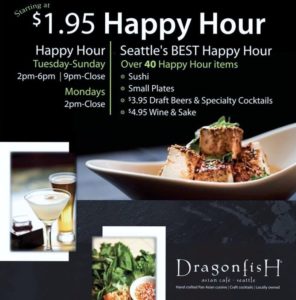 Spring rolls are a tricky thing. Seem simple, but often leave way too much batter and grease roiling in your stomach. But someone knows what they’re doing in DragonFish’s kitchen. They were nice, light, hot and no grease left on the plate. Between bites of my spring rolls, salad and tuna sushi rolls I left full, but not stuffed and feeling healthy. And to put a cherry on the meal, Little Milton’s Grits Ain’t Groceries came over the stereo.

Oh man, what a great soul stopper of a song. 3 minutes of horn driven, gritty vocal by Little Milton worthy of a Shakespeare sonnet in terms of wit in how much he loves his woman, “if I don’t love ya baby, grits ain’t groceries, eggs ain’t poultry and Mona Lisa was a man.” Song always leaves me in a great mood, should be played tons more.

That night, ran in from the rain to Aqua’s Red and White Party. Had a quick, fun conversation with Exec Chef Wesley Hood who was in charge of quarterbacking a whole bunch of tasty treats for 300 plus people. There was a lot of good food but my fav was the breaded prawns. You know it’s a classy, good time when everyone holds their wine glass by the stem.. ha ha. 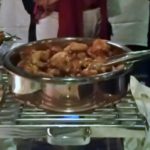 Next night I was eager to renew acquaintances with El Gaucho’s flagship restaurant on 1st. El Gaucho is a great old time meat joint. You know one of those places that is so dark you can barely see in front you, red booths on the main floor, with tux clad waiters, friendly bartenders and a dynamite grilling meat smell wafting out of the kitchen. I sat at the bar and ordered their happy hour steak sandwich that came with duck fat fries. Add a couple of craft Seattle beers and I was one happy, stuffed camper.

Next day had some laughs talking to a whole bunch of eager VIP food, wine and spirit hounds outside CenturyLink Stadium. Once inside, got to exchange a few pleasantries with Taste of Washington PR gal Averyl Dunn who did a terrific job keeping the lines moving and taking care of a 101 other things leading up to the Grand Tasting. As for Taste Washington, bring it on again! Tons of good craft breweries tucked away in the corner, tons of fantastic Washington State wines to sample, a whole bunch of eateries offering fine snackies and bites. Even Astroturf laid out so you didn’t kill your feet walking on the cement floor.

Got back to my hotel at the Silver Cloud Eastgate in Bellevue and was pleasantly surprised to find their promotion for Washington wine month: a silver tray with wines glasses, corkscrew and a bottle of Columbia Cab. One thing about that Columbia wine label, the fog-shrouded Washington State grappa hills really grabs your eye! I don’t know why more Napa and Sonoma wineries aren’t showcasing their vineyards. Considering all the incredible vistas they got on their properties and tasting rooms, why not run a pic of that on their label instead of all these boring traditional print labels or ridiculous critter labels and other stuff that have  nothing to do with wine. Columbia’s label sure grabbed my eye when I walked into my hotel room and as it would on the store shelf as well….. just  sayin… 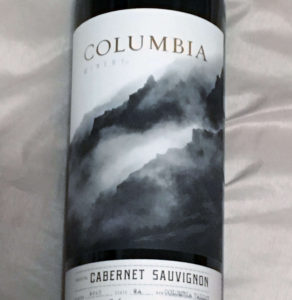