Had a blast and a half at Del Dotto Family Wineries & Caves party for its wine club members. Wow! Man, do they know how to throw a party!!! It starts from the top, having Joshua Schwartz, as their Exec Chef, a Thomas Keller protégé who had 10 years’ experience at places like French Laundry, Per Se and Bouchon, it stands to reason that the food would be great.

Del Dotto’s quality really impressed the Insider.  Let’s face it. You get past more than 25-30 for dinner, the quality usually really starts to decline.  But it was amazing, right from the start when you entered the high vaulted lobby with thick, juicy prawns on offer with a nice dipping sauce.

A stroll down a hallway, past their barrels, where enthusiastic staff offered dip pours from their barrels, out into their gorgeous grounds back of the main building. Just so much food and wine! Crispy, tasty veggies, rare roast beef carved in front of you, a seafood section featuring lobster and scallops and more. Tons of big pours of Del Dotto’s wines: nice cabs, merlot and pinot. All offered with abandon by the cheerful, helpful staff.

Before things got totally crazy for Schwartz, the Insider got him to cough up a few minutes to do the Insider quiz which he seemed to really enjoy. “You don’t ask the usual boring questions.”

Last night’s dinner? Oh my wife is a really good cook. She made a terrific, roasted pork loin with sautéed vegetables that was just delicious.

Favorite music? The Grateful Dead. Clunk. The Insider couldn’t resist telling Schwartz a Dead joke. What does a first timer at a Dead concert say when the drugs wear off? This music sucks!!!

Schwartz laughed his head off. My sister can’t stand the Dead either. But I had such a blast when my restaurant buddies took me to a Dead concert when I was a teen that it just stuck with me. You either get it or you don’t.

Favorite Napa restaurant for a night out? I like 1313 on Main for their menu and service.

Any brush with celebrity?? Oh tons working for the Keller Group.  But you know what really impressed me was when I was working at Bouley in New York. I got to meet Eric Clapton and he was such a gracious, nice guy. Went around and shook everybody’s hand and thanked them for their service. It showed me you don’t have to act like a jerk just because you’re a celebrity.

Favorite thing about living and working in Napa? The centrality of it. I mean, an hour to the ocean to the west, 2 hours to the east for skiing. An hour south and you’re in a great city. Plus, the sense of community here in Napa is appreciated as well.

What makes a great winery or restaurant? Commitment. I’ve been so lucky in the last 10 years being with Del Dotto Group. They keep expanding but always with quality in mind.

Final thoughts? Just a tip of my chef’s hat to the Del Dotto Group. They have a great vision and I’m really proud and excited to cook for them. 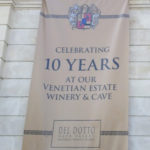